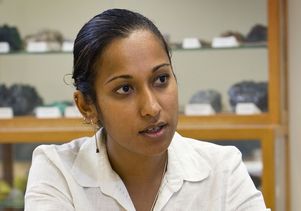 Aradhna Tripati, an associate professor in the departments of Earth, planetary and space sciences, and atmospheric and oceanic sciences, and UCLA’s Institute of the Environment and Sustainability.
Reed Hutchinson/UCLA

Aradhna Tripati—a professor of earth, planetary, and space sciences at UCLA—was one of three UCLA researchers to be awarded the Presidential Early Career Award for Scientists and Engineers (PECASE) by President Obama earlier this week. The award is the highest honor bestowed by the United States Government on science and engineering professionals in the early stages of their independent research careers. Tripati was recognized for her work with the National Science Foundation which, according to the White House release, “show[s] the greatest promise for assuring America’s preeminence in science and engineering.” Tripati’s work concerns ‘clumped’ isotopes, which may be used to understand questions relating to climate change.

Additional coverage on the 2017 Presidential Early Career Awards for Scientists and Engineers: