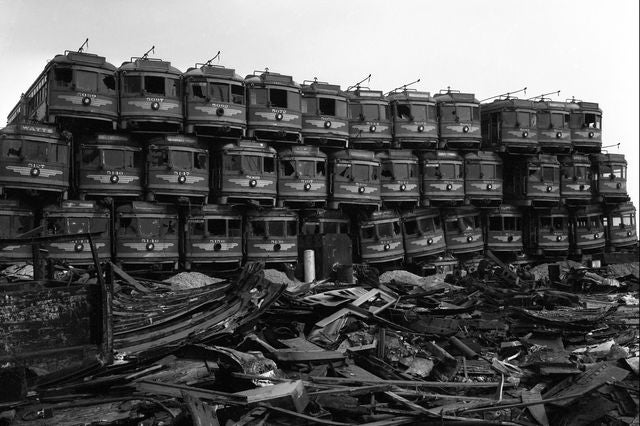 Old Pacific Electric Railway cars await their conversion into scrap metal at a junkyard on Terminal Island in 1956. The collapse of the railway system that once crisscrossed Southern California was due to a number of factors, including the rise of the automobile.
Los Angeles Times Photographic Archive/UCLA Library

In a recent lecture at the UCLA Luskin School of Public Affairs, professor Ethan Elkind chronicled the history of public transit in L.A., beginning with the old Pacific Electric Railway system and concluding with the passing of Measure M, which promises to generate $30 billion for transit over the next 40 years. Elkind, who directs the Climate Change and Business program and is jointly appointed at UCLA and UC Berkeley schools of Law, is the author of “Railtown: The Fight for the Los Angeles Metro Rail and the Future of the City.”