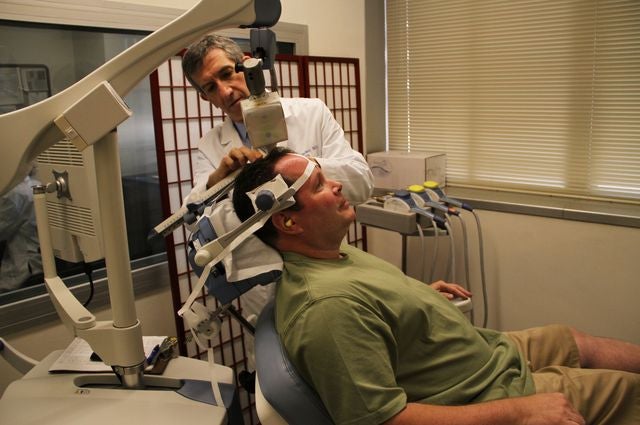 Dr. Andrew Leuchter talks with a patient who is about to undergo transcranial magnetic stimulation, which treats depression by sending magnetic pulses to a specific area of the brain.
UCLA Health

Depression is the number one cause of disability worldwide according to the World Health Organization, but common antidepressants work for only 60 percent to 70 percent of people who take them. The Semel Institute for Neuroscience and Human Behavior at UCLA is one of a handful of hospitals and clinics nationwide that offer transcranial magnetic stimulation (TMS), an innovative treatment for depression that directs magnetic pulses deep inside patients’ brains. Patients that have not seen improvements in depression symptoms while taking antidepressants have seen improvements in symptoms following TMS treatment.  Dr. Andrew Leuchter, director of the Semel Institute’s TMS clinical and research service, reports that “it’s completely noninvasive and is usually very well tolerated”. Research on TMS continues to explore the possibilities of utilizing TMS for other disorders such as schizophrenia and epilepsy.