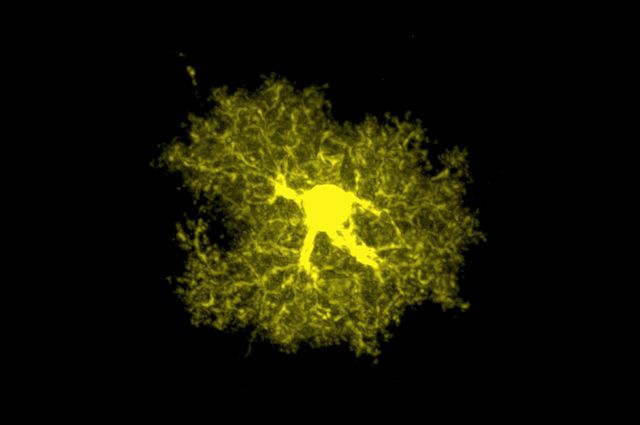 Thousands of branches and branchlets emanate from an astrocyte’s cell body, which is the dense portion in the middle of the image.
Baljit Khakh/UCLA

UCLA researchers reveal that astrocytes, a type of brain cell that supports and protects neurons, aren’t all the same. Baljit Khakh, a UCLA professor of physiology and neurobiology and the study’s senior author, has upended a long-standing idea in neuroscience that all astrocytes are indistinguishable. The astrocyte has several unique functions in the brain and impaired astrocyte function has been implicated in diseases such as Huntington’s, ALS, multiple sclerosis and Alzheimer’s. Khakh and his team studied astrocytes in two distinct areas of the mouse brain – finding that astrocytes in each area had unique molecular characteristics. In addition to this research, Khakh is investigating the role of astrocytes in depression as part of a Depression Grand Challenge demonstration project. This basic neuroscience finding contributes to a more comprehensive understanding of the brain, which may enable researchers to better identify how astrocyte irregularities contribute to depression and other diseases.

Source: Not all astrocytes in the brain are the same, study finds UCLA Newsroom, 13 July 2017

Researchers upend longstanding idea that astrocytes can’t be differentiated from each other Medical Xpress, 14 July 2017

Not all astrocytes in the brain are the same, study finds MyScience.org, 13 July 2017