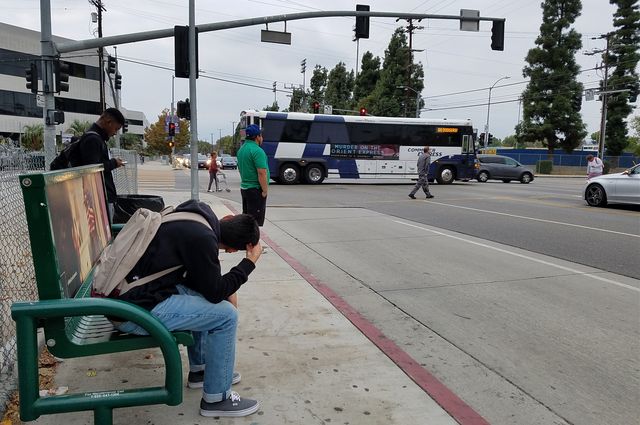 Research has shown that in cities including Los Angeles, bus riders frequently spend 15 to 25 minutes or more each way waiting for a bus, which exposes them to pollution at intersections.
Christelle Snow/UCLA

With funding from the National Science Foundation and the California Air Resources Board, UCLA postdoctoral fellow Wonsik Choi from professor Suzanne Paulson’s lab (Atmospheric & Oceanic Sciences), demonstrated that moving bus stop sites 120 feet away from intersections would substantially reduce the amount of pollution to which bus riders are exposed by waiting for a bus. Currently, most public transit stops are located immediately after an intersection.  The research revealed that pollutant levels dropped significantly, as you move away from the intersection, and concluded that if public transit stops were moved farther away from intersections – between 120 and 150 feet away – that riders would be exposed to far lower levels of harmful emissions. This reduction in exposure could be significant since public transit riders on average spend 30 minutes per day waiting for rides.  Other authors of the study include:  Dilhara Ranasinghe, J.R. DeShazo and Jae-Jin Kim.