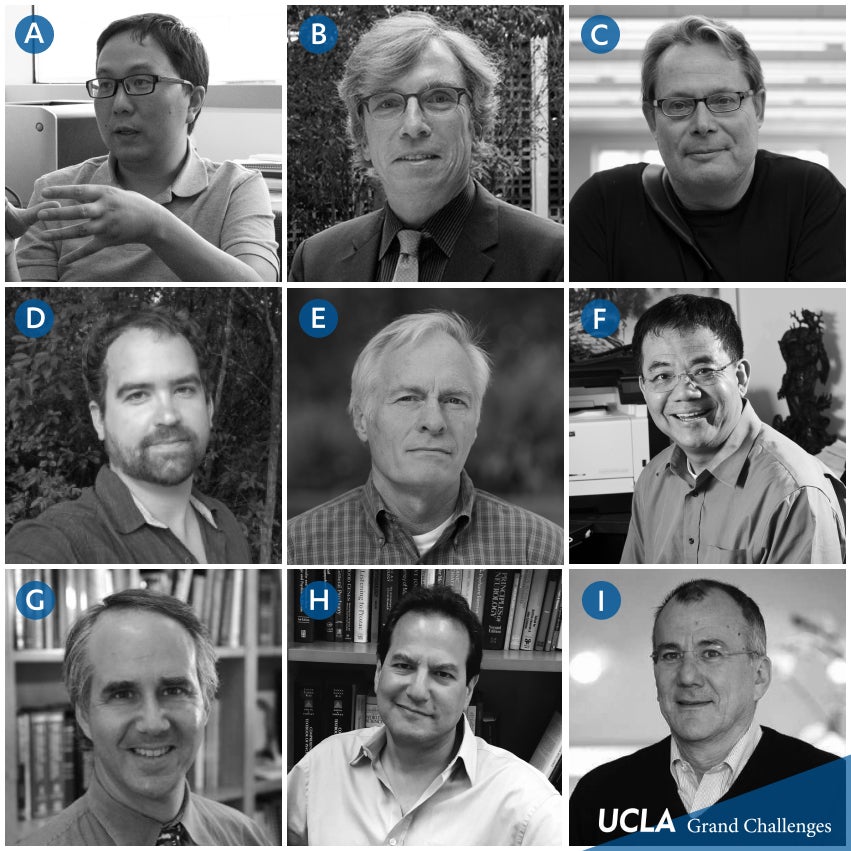 Six researchers involved with the Sustainable LA Grand Challenge made the list. Read below to learn more about these faculty whose research is critical to informing a pathway to renewable energy, local water, and a healthier ecosystem in Los Angeles County.

Xiangfeng Duan’s research on the design and synthesis of nanostructures contributes to advances in fuel cell efficiency and energy storage, among other applications. The development and deployment of these nanotechnologies plays a critical role in realizing a renewable energy future. Duan is a professor of chemistry and biochemistry.

Peter Kareiva takes a multidimensional approach to studying conservation science, with an emphasis in understanding the role of humans. His work provides an important nexus for strategically thinking through ecosystem health in Los Angeles and other urban systems. Kareiva is the Director of the Institute of the Environment and Sustainability and professor of ecology and evolutionary biology.

Nathan Kraft looks at ecological factors that determine the biodiversity of plant communities, an integral part to understanding the well-being of Los Angeles’ landscape. Kraft is a professor of ecology and evolutionary biology.

Dennis Lettenmaier, a distinguished professor of geography, received a Sustainable LA Grand Challenge research grant program award to develop sustainable urban ecosystem management plans for the region based on the historical effects of urban vegetation cover on water use and run-off. This research will inform how changes in urban land cover, such as switching to drought tolerant landscape, will affect water demand in Los Angeles. Professor Lettenmaier also served as part of the research committee that developed the Sustainable LA Five-Year Work Plan, and is a SLA GC-URSP faculty mentor.

Yang Yang, a materials science and engineering professor from the Henry Samueli School of Engineering and Applied Science, received a Sustainable LA Grand Challenge research grant program award along with his colleagues in Engineering and Arts & Architecture to develop a device that integrates flexible solar panels and flexible batteries. Professor Yang specializes in highly efficient flexible, transparent solar cells, and combining these solar panels with flexible batteries for storage in real-world architecture could make power-collecting window shades a reality in Los Angeles buildings, and in buildings across the world.

Three researchers recognized on the 2017 Highly Cited Researchers list are engaging in research relevant to the Depression Grand Challenge. Read below to learn more about UCLA faculty whose research is informing efforts to cut the burden of depression in half by 2050 and eliminate it by the end of the century.

Daniel Geschwind is professor of Neurology and Psychiatry at David Geffen School of Medicine at UCLA and director of the Institute for Precision Health at UCLA. The institute provides leadership and strategic vision, facilitating the development of platforms for big data integration, clinical diagnostics, and patient bio-banking. This platform is an essential component for the Depression Grand Challenge and other precision medicine efforts.

Nelson Freimer is the director of the Depression Grand Challenge and Maggie G. Gilbert Professor of Psychiatry and Biobehavioral Sciences. The research in Dr. Freimer’s laboratory aims to use large scale genomics methods to identify the genetic basis of complex traits, particularly neurobehavioral disorders like depression. Dr. Freimer is the leader of the Depression Grand Challenge, providing vision and direction for this campus-wide endeavor, which includes a large-scale 100K person study to uncover the environmental and genetic basis of depression.

Michael Sofroniew, Professor of Neurobiology at David Geffen School of Medicine at UCLA, is engaged with the Discovery Neuroscience component of the Depression Grand Challenge. Dr. Sofroniew helps lead one of the demonstration projects, focused on understanding astrocytes, a type of brain cell, and their role in the brain circuits of individuals with depression.