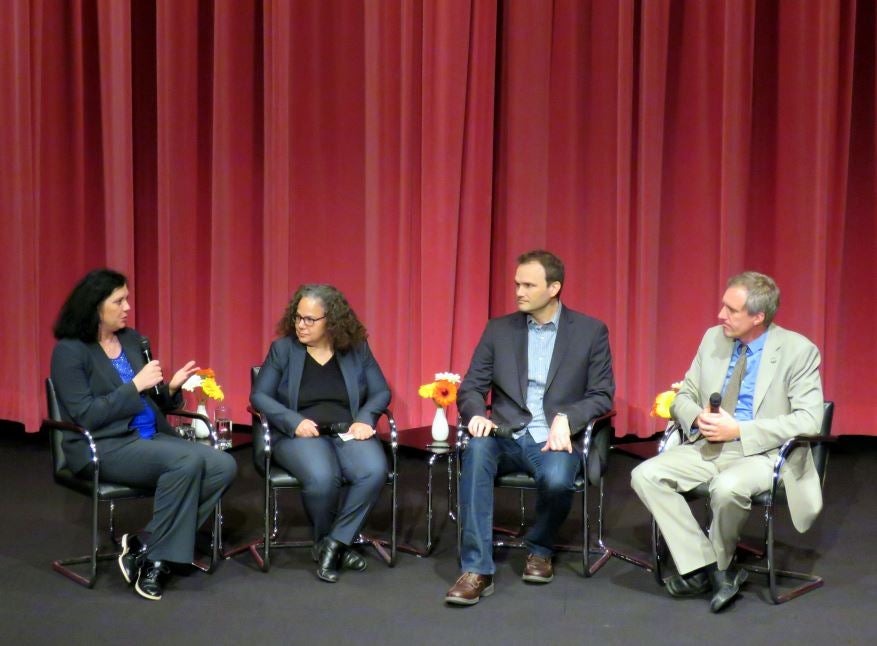 Future LA series kicks-off with Los Angeles and 100% Renewable Energy panel. From left to right: Angelina Galiteva (founder and board president of the Renewables 100 Policy Institute and member of the California Independent System Operator board of governors), Nancy Sutley (chief sustainability and economic development officer at the Los Angeles Department of Water and Power), Richard Wirz (associate professor in mechanical and aerospace engineering at UCLA Henry Samueli School of Engineering and Applied Science), and David Hochshchild (Commissioner at the California Energy Commission).
Nurit Katz

California renewable energy leaders spoke to a full crowd in Los Angeles on Wednesday, February 7, 2018, at the Hammer Museum’s Billy Wilder Theater on the feasibility of Los Angeles reaching 100-percent renewable energy by 2050. The evening’s conversation was the first event of the yearlong Future L.A.: Engineering a Sustainable Supercity series coordinated by the UCLA Sustainable LA Grand Challenge and the Hammer Museum.

California Energy Commissioner David Hochschild moderated the discussion among panelists, who included Professor Richard Wirz from the UCLA Henry Samueli School of Engineering and Applied Science; Angelina Galiteva, founder and board president of the Renewables 100 Policy Institute and member of the California Independent System Operator board of governors; and chief sustainability and economic development officer at the Los Angeles Department of Water and Power, Nancy Sutley. Each panelist addressed different challenges and opportunities of expanding the renewable energy grid.

Hochschild kicked off the evening of presentations and discussions detailing how far renewable energy has come in California despite warnings by critics of its inevitable failure. He emphasized that California has had just the opposite of failure, and that in fact, as renewable energy production has grown, so has the state’s economy. The tone established by Hochschild, and maintained by each panelist, was matter-of-fact and confident: transitioning LA to run on 100-percent renewable energy is possible, and we are already moving in that direction. “It’s not an issue we need to study to death, it’s an issue we need to step up on,” Galiteva said. The state is routinely running on 40-percent renewables when we include big hydro (note, big hydro does not fall under California’s definition of renewable energy).

Professor Richard Wirz began by discussing the technology needed to realize the 2050 renewable energy goal set by the Sustainable LA Grand Challenge. Solar energy is the main source that California will come to rely on, Wirz said, but its current technological capabilities are not enough. Right now, most solar development centers on photovoltaics, the common solar panel, but according to Wirz, even if every rooftop in LA had solar panels, only 10-percent of the region’s energy needs would be met. The large-scale solution is concentrated solar power (CSP). CSP could provide storage and ultimately comprise 56-percent of LA’s energy supply, according to Wirz. As CSP becomes more cost-effective, the infrastructure and economic barriers of transitioning to renewables will dissolve.

Arguing against the myths of renewable’s unreliability from an economic and policy standpoint, Nancy Sutley and Angelina Galiteva emphasized that renewables – which are not limited to solar – are in fact feasible and already central to California’s energy network. Solar power and other renewables have on occasion supplied up to 70-percent of a day’s energy in California before, Galiteva said. Renewables are able to support the grid without input from fossil fuels, reduce other burdens of using fossil fuels, and satisfy what Sutley called the “three pillars of sustainability”: Environment, Equity, and Economy. Renewable energy requires less water than fossil fuels, reducing consumption and the reliance on expensive imported water. Renewables can also offer significant economic opportunities, such as trading excess solar energy or providing it at low costs during midday periods when supply outstrips demand.

The panel did not deny that there are significant challenges, such as technological development and ensuring low costs and equal access to renewable energy. However, they saw these challenges as an opportunity. For instance, electric vehicle (EV) demand for large amounts of low-cost energy is an opportunity for technological development in energy storage. An EV could act as a sink for excess solar energy. This stored energy can come at a lower price during the middle of the day, when solar power is abundant. The integration of infrastructure, transportation, and economic incentive can allow the strengths of each component to supplement the weakness of others, creating a system that is resilient, reliant, and optimized. Overall, the conversation was very optimistic about Los Angeles and California leading the transition to clean and carbon-free energy sources.

The yearlong Future L.A.: Engineering a Sustainable Supercity series will continue on Wednesday, March 21, 2018, with a discussion on the intersection of the built environment and the natural ecosystem in a hotter LA.

This post was written by Conor Cusack. He is a geography/ environmental studies major in his senior year, an outdoor enthusiast and a writer for Sustainable LA Grand Challenge.