Joanne and George Miller Family Endowed Term Chair
Professor in Psychiatry and Biobehavioral Sciences and Psychology at the Semel Institute of Neuroscience and Human Behavior, UCLA 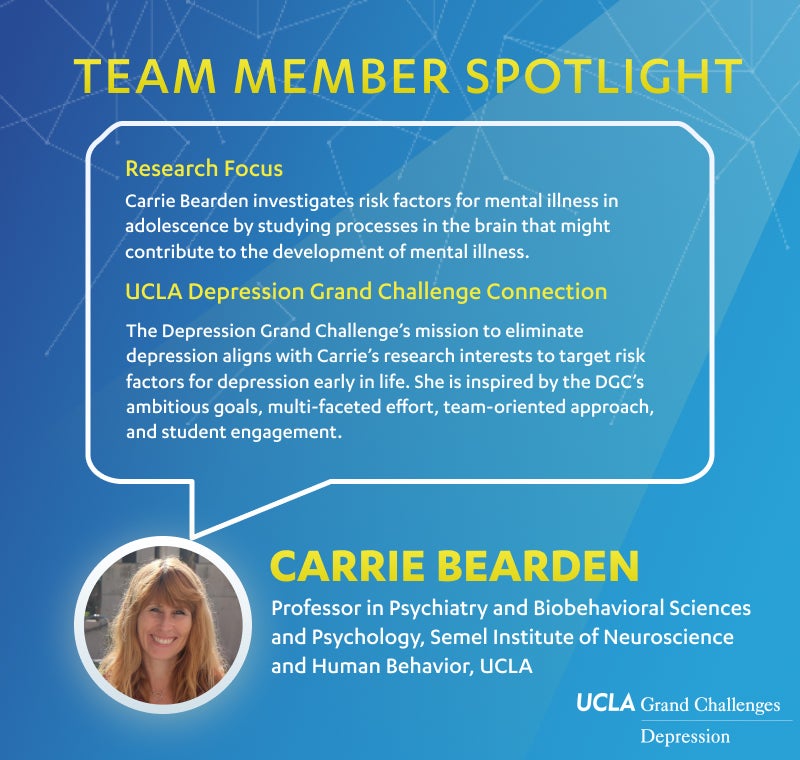 Carrie is inspired by the UCLA Depression Grand Challenge’s (DGC) ambitious goals, multi-faceted effort, team-oriented approach and student engagement. The DGC’s mission to eliminate depression aligns with Carrie’s research interests to target risk factors for depression early in life.  She is particularly excited about the DGC’s long-term longitudinal follow-up of study participants and use of smart phone remote monitoring will provide a lifespan perspective on depression, rather than a single snapshot of symptoms at one timepoint.

Carrie enjoys traveling, eating (ice cream especially), and finding interesting hikes around Los Angeles to do with her kids and dog.

“My #DepressionHero is Kay Redfield Jamison, who began her career as a professor in our department. She first developed symptoms of bipolar disorder as an adolescent, which became increasingly severe over time. Her memoir An Unquiet Mind details her personal story with mania and severe depression, and her journey to acceptance of her diagnosis and need for treatment… I will always admire her bravery for telling her story. She has been a huge inspiration for me and many others.”